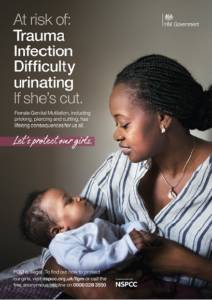 Female Genital Mutilation (FGM) is a form of child abuse and is an act of violence against women and girls. It is sometimes also known as female circumcision. Other local terms are:

The term FGM is used to refer to the removal of part or all of the female genitalia for cultural or other non-therapeutic reasons. This is extremely painful and has serious consequences for physical and mental health. It can also result in death.

It is illegal to practice FGM in the UK. It is also illegal to take a child abroad for FGM even if legal in that country.

FGM is sometimes incorrectly believed to be an Islamic practice. This is not the case and the Islamic Shari’a Council, the Muslim College and the Muslim Council of Britain (MCB) have condemned the practice of FGM.

FGM is classified into four categories:

The age at which girls undergo FGM varies enormously according to the community. The procedure may be carried out when the girl is newborn, during childhood or adolescence, just before marriage or during the first pregnancy. However, the majority of cases of FGM are thought to take place between the ages of 5 and 8 and therefore girls within that age bracket are at a higher risk.

Free on-line training in FGM awareness is available at: www.fgmelearning.co.uk

The National FGM Centre has developed a Direct Work Toolkit to help social workers carry out direct work with families and girls at risk of FGM, or who have undergone FGM. The toolkit provides plans for sessions aimed at children aged seven and older with separate activities for parents, carers and young people. The Centre has also published Guidance for Schools and Colleges that outlines what schools and colleges should consider and the action they should take when concerns are raised regarding a range of issues, including harmful practices such as FGM.

The Home Office has also produced a FGM Resource Pack that includes:

The Serious Crime Act 2015 in England and Wales introduced a requirement for all regulated health and social care professionals (registrants) to report FGM found in girls under the age of 18 years.

If you are concerned that a child may be at risk of FGM:

For contact details go to: What to do if you are worried about a child

The ‘Ending Female Genital Mutilation’ short film gives a first-hand account of a woman’s experience of FGM and health professionals talk about the physical and psychological effect.

Breast ironing is a practice whereby the breasts of girls typically aged 8-16 are pounded using tools such as spatulas, grinding stones, hot stones, and hammers to delay the appearance of puberty.

Breast ironing is often carried out by the girl’s mother with the belief that she is:

Breast ironing is often a well-kept secret between the girl and her mother. This can make it difficult for professionals to identify. Care must be taken to navigate the deep-seated cultural belief and familial sensitivity of this practice. Many girls will not disclose that they are a victim of breast ironing for fear that their mother will get into trouble; or they believe it is being done for their own good.

Some signs that a girl is at risk from breast ironing include:

Like other forms of FGM, breast ironing is an extremely painful process for the victim. The process of breast ironing combined with insufficient aftercare leaves young girls exposed to significant health risks, such as:

The practice of breast ironing is not explicitly covered under legislation. However, it is understood by the Government to be physical abuse.

If you are concerned that a child you know is at risk of breast ironing:

Breast Flattening is when a girl’s breasts are flattened to slow down or stop them growing.  Childline has some really useful information on this.  Click here to learn more.

External sites
Connect with us